Chanukah (also spelled Hanukkah or variations and pronounced with a guttural, “kh” sound, kha-nu-kah, not tcha-new-kah) is the Jewish eight-day, wintertime “festival of lights,” celebrated with a nightly menorah lighting, special prayers and foods prepared with olive oil.

We headed to chabad.org to get the dish on Chanukah, and discovered that the holiday harks back to the second century BC, when the Holy Land was ruled by the Seleucids (Syrian-Greeks), who tried to force the people of Israel to accept Greek culture and beliefs. Against all odds, a small band of faithful but poorly armed Jews, led by Judah the Maccabee, defeated one of the mightiest armies on earth, drove the Greeks from the land, and reclaimed the Holy Temple in Jerusalem.

When they sought to light the Temple’s menorah (the seven-branched candelabrum), they found only a single cruse of olive oil that had escaped contamination by the Greeks. Miraculously, they lit the menorah and the one-day supply of oil lasted for eight days, until new oil could be prepared under conditions of ritual purity. To commemorate and publicize these miracles, the sages instituted the festival of Chanukah. You can read the full story of Chanukah here.

Since the story of the Chanukah miracle involved oil, it is customary to eat foods prepared with oil. We prepared this Challah bread from All Recipes with olive oil to honour the traditional story, and added three chopped Ambrosia apples to honour our farmers. 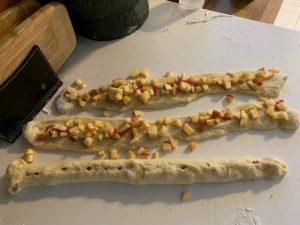 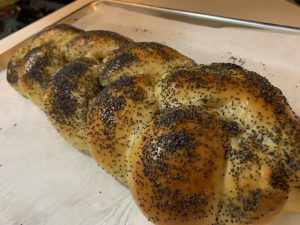