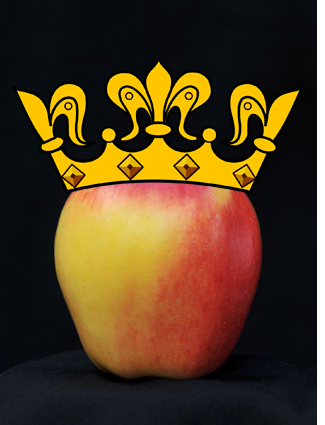 What’s the best new type of apple? According to the judges at this year’s Royal Agricultural Winter Fair it’s Ambrosia apples.

In particular, it’s the Ambrosia apples grown at Happy Valley Farm in Summerland, BC. The judges awarded them the Canadian Horticultural Council Trophy for being the Grand Champion of New Varieties. These apples beat out all other new varieties from growers across Canada.

Steve Brown wasn’t there to accept the award in person but he’s hopeful that it will be sent out to him. Just don’t expect to find him showing it off anytime soon. He remains humble in the wake of his win, telling us, “It’s kind of exciting, kind of neat but I feel sheepishly guilty. There are a lot of great growers in the Valley who also deserve to win.”

As astounded as he was to win, he’s not surprised that Ambrosia was the apple that came out on top. He freely admits that it’s his personal go-to apple fresh off the tree.

That’s not the only reason he’s happy to see Ambrosia take the trophy. “Ambrosia is a uniquely special variety; from a chance seedling born and bred right here. It’s pretty neat to have something homegrown get recognition with the rest of the world or at least the rest of the country,” he said of the winning apple. He expects this is just the beginning. “I hope that Ambrosia continues to get the recognition it deserves. It’s a great piece of fruit.”

So, the next time you bite into an Ambrosia apple, know that according to the Royal Agriculture Winter Fair judges, you’ve got great taste.

Want to see why Steve’s Ambrosia apples are the best? We visited Happy Valley Harvest in 2013 to meet the Brown Family and get a tour of their orchard. Check out that video here.