Should You Eat the Ambrosia Apple Core? 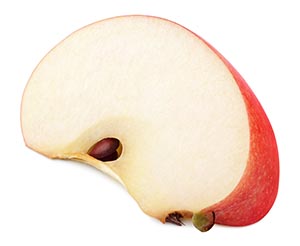 Most people throw their apple core out. If you love Ambrosia apples, then you probably nibble that core down to almost nothing. However, new research suggests that you can (and should) go even further!

We’ve written about how Ambrosia apples benefit your digestive health in the past. These benefits primarily come from the fibre in apples as well as the good bacteria that supports your gut. The latter is the subject of this new study.

The researchers of this study confirmed that apples do contain a good amount of healthy bacteria known to promote a balanced gut microbiome. In other words, eating apples helps improve your body’s ability to stay healthy and properly digest food.

The study reports, “that we consume about 100 million bacterial cells with one apple.” But, these cells aren’t distrubuted equally throughout the apple. The study also found that the stem and seeds of the apple contain the highest concentration of healthy bacterial cells.

So, if you’re throwing out the core, you’re missing out on one of Ambrosia apples’ healthiest parts!

But, don’t apple seeds have cyanide? Herein lies the challenge.

Many people avoid eating apple seeds because of the belief that they contain cyanide, a naturally occurring but potentially dangerous chemical. This is only partly true. Apple seeds do contain a compound called amygdalin. If the seeds are crushed or chewed, then the amygdalin is released and the digestive system metabolized it into hydrogen cyanide. Cyanide can be lethal in large doses. However, experts believe that you would need to eat (and chew) hundreds of seeds for it to reach a dangerous level.

So, should you eat the apple core?

It’s up to you. You can certainly gain the benefit to your gut microbiome without any real danger if you only do it once in a while. But, if you eat several Ambrosia apples a day, you might not want to always eat the core.