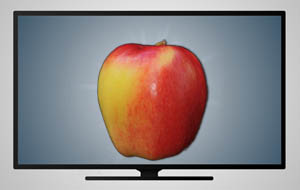 Are you as big a fan of cooking competition shows and healthy eating as we are? Then you can imagine our excitement when we found out that there was a new television show featuring amateur chefs working with Canadian ingredients.

The Healthy Canadian Cook-Off is produced by the folks at Health Wellness & Lifestyle TV and airs on JoyTV. In its inaugural season, the show featured three homecooks including a firefighter, yoga instructor, and fashion designer. Each of them competed for the title ‘Healthiest Canadian Chef’. They each embraced the opportunity to work with local, Canadian ingredients such as flaxseed oil from Saskatchewan, birch syrup from Manitoba, and Ambrosia apples – which are the result of a chance seedling found in an orchard in Cawston, BC.

The creativity of the dishes they came up with was impressive. Each contestant had to make an entrée and a dessert or cocktail that would dazzle the panel of celebrity judges.

We don’t want to give too much away but the resulting main dishes included spicy chicken with an avocado, Ambrosia apple salsa as well as a chicken schnitzel with a deconstructed walnut and Ambrosia apple garden salad. For dessert, the chefs presented a variety of treats including an Ambrosia apple tarte tartin made with oats.

It’s inspiring to see so much creativity in the kitchen and we love to see Ambrosia apples being used in different ways.

If you want to know who won the championship, you can watch the finale on Facebook. And, if this competition gets you excited about creating healthy meals with Ambrosia apples, check out our recipes for inspiration and then let us know what you come up with.