Around the World – USA 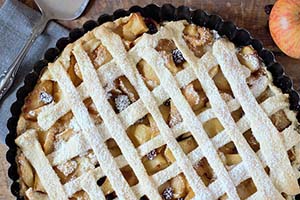 According to The American Table, a website dedicated to all things culinary in the US, the only apples indigenous to North America are wild sour crab apples. Seeds for all other varieties were brought to the colonies by the first settlers, who felt a nostalgic connection to this humble fruit. Generations later, the apple has become the most popular fruit in the US, followed by the orange and the banana.

A popular association between American folklore and apples is the real-life Johnny Appleseed. John Chapman was an American pioneer and missionary who became a legend in his own lifetime (1774-1845) for his kindness and generosity, as he roamed the mid-western US barefoot while preaching the gospel. He began several apple nurseries throughout the Midwest and is credited with converting many native populations to Christianity.

Most of the apples he planted were not eating apples, but cider apples, and some cynics argue that his claim to fame is the introduction of liquor, not apples. When he died, his estate consisted of several plots of apple nurseries throughout Ohio and Indiana, though most were lost during the financial panic of 1837, and many of the orchards were destroyed during Prohibition.

Controlled Atmosphere  (CA) storage was adopted for commercial use in the 1940s. CA is essentially a low oxygen cooling storage system that helps preserve the storage life of fruit. In fact, any apples on your store shelves between December and March were probably stored this way

Of course, when one thinks of apples – and specifically apple pie – it’s hard NOT to think of our neighbours to the south – “As American as apple pie!” A New York Times article in 1902 claimed that, “No pie-eating people can be permanently vanquished,” and American soldiers during World War II brought the sentiment into popularity . When asked what they were fighting for, a common response became, “For mom and apple pie” which morphed into “As American as motherhood and apple pie”.  The ”motherhood” was dropped, but the “apple pie” stuck.

The Americans did not invent the apple pie, however. This culinary delight has been around longer than the US Constitution, with the first recipe recorded in England as early as 1381, and Dutch cookbooks from the 16th century have inclusions of the pastry.

Wherever the origin, Ambrosia apples are perfect for apple pie. Check out the blog from when we headed into the test kitchen with this tasty treat.