Around the World with Ambrosia Apples – Canada 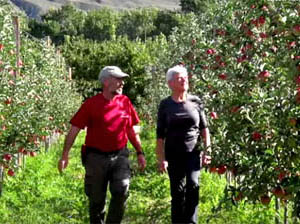 In this new blog series, we’ll explore the relationship to apples from different cultures, and incorporate Ambrosia apples into some favourite cuisines from around the world.

We thought we’d begin where it all started for Ambrosia apples: Canada.

Canada is the second largest country in the world, and shares the longest land border in the world with our southern neighbours, the United States. Canada is a bilingual country with English and French as the two national languages. Indigenous peoples have populated the country for thousands of years, with European colonisation occurring in the 16th century. Today, the country has a great number of ethnic groups represented in it’s current population, and as a result, the people of Canada form a cultural mosaic.

There are over 100 varieties of apples grown in Canada and they come in a number of different colours, sizes, flesh textures and skin thicknesses. Canadians have access to fresh apples year-round depending on the variety, climate it is grown in, shelf-life, and storage. The primary growing regions are Ontario and BC, but apples can also be found growing in Quebec, New Brunswick, Nova Scotia and Prince Edward Island.

Canada has a long history with apples and though most apple varieties are cultivated by orchardists, the McIntosh, and our very own Ambrosias were chance seedlings that were discovered here. In fact, according to Food Atlas, a website that pairs cuisine with regions, these are the two favourite varieties in the country.

In the spring of 1811, John McIntosh discovered an apple growing in the woods of southeastern Ontario. It’s origin was unknown – a “chance seedling.”

Then, in 1990, another chance seedling was discovered, this time in Cawston, BC.

The new variety was named Ambrosia, which in Greek mythology means “food of the gods”. The Ambrosia apple was registered in 1993 and over the past 20 years, it has grown in popularity and is now available for purchase worldwide. Ambrosia is a low-acid apple, which makes it easier for kids and older people to digest, it is slow to brown and is great in salads, baking and main dishes.

Canada is the fifth largest exporter of food, with BC, Ontario and Quebec producing most of it. We also produce 85% of the world’s maple syrup. We served Anna’s Apple Pancakes from our ‘Come Brunch with Me’ blog with a generous pour of the brown nectar, and the results were fantastic!