Around The World With Ambrosia Apples – France 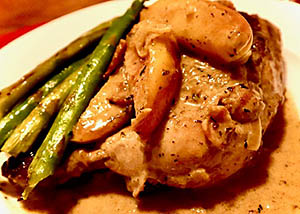 When talking about fine cooking, French cuisine is arguably the benchmark. Some of the world’s greatest chefs were trained in France, and the mention of French cuisine evokes thoughts of rich and luscious sauces and tarts. According to the Encyclopedia Britannica, there is a good reason:

“In early civilizations, wealth was nearly always synonymous with political or religious power, so the primary employers of professional chefs were kings, aristocrats, or priests.

That divide between professional chefs cooking for the wealthy and peasants cooking for themselves drove the development of many cuisines. Each side influenced the other. Professional chefs sought to do things differently than the masses, to create a distinct culinary experience for their elite clientele. Commoners, in turn, sought to adopt some of the finer things in life by copying the dishes served at royal tables. Countries with a long history of a large and stable aristocracy or ruling class developed the most complex, highly refined, and elaborate cuisines. In those societies cooks and their recipes produced a new form of one-upmanship.

France is perhaps the best example. Despite its vibrant regional peasant cuisine, France was for centuries dominated by aristocratic food. Early on, French nobles and other members of the ruling class used dinners as status symbols. … France is especially interesting because it achieved renown for its cooking very early. La Varenne’s book Le Cuisinier Francois (1651) was translated into English in 1653.”

La pomme is the favourite, and most purchased, fruit of the French, so it’s no surprise that many gourmet creations include it. With their crunchy texture and award-winning taste, Ambrosia apples are perfect for these dishes.

We tried our hand at a French culinary classic, Poulet a la Normandie (Chicken Normandy) , and the results were nothing short of magnifique! Try for yourself ; here’s the recipe :

Heat the oil over medium-high heat in a large pot. Pat dry the chicken thighs and season with salt and pepper, then add to pot and cook until browned on both sides, remove and set aside. Add the apple wedges to the pot and sauté for a few minutes until golden and caramelised, then remove.

Turn the heat down to medium and add the onions and brandy to deglaze the pot. When the onion has softened, add the garlic, then add the chicken and the cider. Raise the heat to high; once the cider boils, turn down the heat to medium and cover the pot and cook for 5-10 minutes, until the chicken is tender and cooked through. Stir in the cooked apples, mustard, cream, and chopped sage. Allow the mixture to simmer uncovered for about 10-15 minutes, until the sauce has reduced and thickened. Serve with a fresh French baguette.