Around the World With Ambrosia Apples – Greece 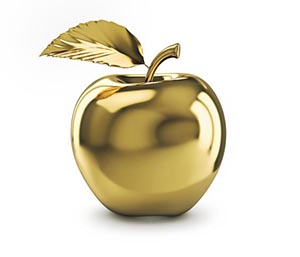 Apples have a long history. It is said that they originated in Central Asia, probably in Kazakhstan. In fact, the capital of Kazakhstan, Alma Ata, means “full of apples.” By 1500 BC apple seeds had been carried throughout Europe, including to Greece, where they have been planted and grown ever since. Although the Greeks don’t eat a lot of apples relative to the rest of the world (they are 68th on the apple consumption per capita chart), Greek mythology is rife with stories of apples, and Ambrosia apples lend themselves beautifully to Greek cuisine. After all, the name Ambrosia is Greek for “food of the gods.”

The most renowned apple in Greek mythology, The Apple of Discord, is said to be responsible for the start of the Trojan War. As the story goes, Eris, the goddess of discord, was  infuriated because she was not invited to the wedding of the mortal hero Peleus and Thetis, the sea nymph. She crashed the wedding feast and threw a golden apple with the inscription “for the fairest” onto the table. A skirmish ensued between three goddesses, Hera, the goddess of marriage,  Athena, the goddess of wisdom, and Aphrodite, the goddess of love and fertility, who all believed they were the worthy recipient of the epithet. As the chief deity, Zeus declared that the fair shepherd prince, Paris of Troy, would judge who would receive the golden apple. Hera promised him power, Athena promised wealth, and Aphrodite promised that she would bestow him the most beautiful woman alive to be his wife. He chose Aphrodite, who declared that Helen of Sparta would be his. Unfortunately, Helen was already married to King Menelaus, so Paris decided to abduct her, and the Trojan War began.

Also in Ancient Greece, the apple was an emblem of love and sexual desire. The Greek god of wine and the harvest, Dionysus, offered apples to win Aphrodite’s love. The affair was brief, but the symbol endured. It was believed that if a man tossed an apple to a maiden, he was professing his love; if she caught the apple, or even attempted to, she was declaring his love reciprocated.

The ancient Greeks believed the apple to bring abundance and fertility; it was customary on the wedding night for the bride to eat an apple, ensuring sexual desire, fertility, and abundance within the marriage.

If all of this talk of ancient Greece and apples has whetted your palate, our Ambrosia Apple Hummus is sure to satiate. Check out the video recipe here.