Bats in the Orchard

Bats get a bad rap. You can blame Halloween with it’s scary fanged version of bats. Or, perhaps old folktales are responsible with their depiction of bats as blood-sucking, flying rodent. Most people turn (and possibly, run) the other way in the second they see a bat. Not farmers. 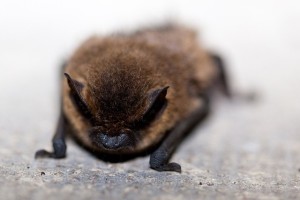 Farmers know that bats in the orchard mean fewer bugs and fewer bugs means a better Ambrosia apple harvest. Having bats in the area is like having an army of exterminators onsite every night. They don’t eat the fruit, and they definitely don’t suck farmer’s blood! There are bats that eat fruit and even bats that will extract blood from animals but those bats don’t live here. Fruit bats are found in Asia, Africa, the Middle East and Australia. Vampire bats live in Central and South America.

The most common type of bat in BC is the little brown bat. They are much smaller than the Vampire or Fruit bat. Even though they are considered ‘micro’ bats they still eat their own weight in bugs every night! They like to eat moths, wasps, beetles, mosquitoes, midges and mayflies. Hopefully, the bats get to them before they can get to your Ambrosia apples. 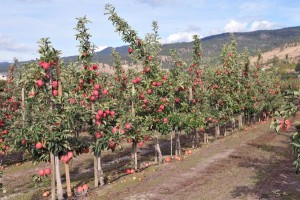 Sadly, the bat population in BC is being threatened by a fungal disease known as white nose syndrome. This is a new condition that has affected bats in North America in the past couple of years. They don’t know what’s causing it but they do know that it’s just starting to threaten bat populations in Western Canada. Conservationists are working hard to solve this epidemic endangering little brown bats. We hope they’re successful because we farmers sure like our free and natural bug patrol. The more bats in the orchard the better.

So, the next time you see a bat, don’t run away.  Point it in the direction of the nearest orchard instead.