In the Ambrosia Orchard After a Strange Winter 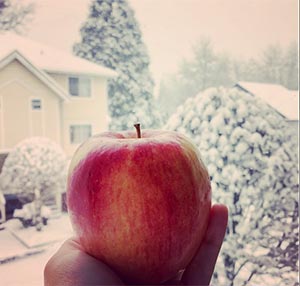 The Okanagan had a very unusual winter followed by an atypical spring. The winter started out warmer than usual and then we saw several very cold weeks. And, despite what the groundhogs predicted, the winter conditions hung on for quite a while. The Spring so far has been drier and colder than normal.

What does all of this mean for the Ambrosia apple growing season?

We reached out to Adrian Arts who was just finishing up his day at one of his Summerland orchards.

He confirmed that the weather has been a challenge this year. They fell a bit behind in February when the weather was too cold for pruning.

“It put us behind by almost a month, which was difficult. Now we are playing catch up trying to get it all pruned.”

Pruning is an important part of the Ambrosia apple growing process. Adrian says that they are almost caught up. He’s spending his days clipping a few more branches and raking the orchard.

That’s good news. He’s also happy to report that there appears to be no frost damage in his area from these past few weeks where the temperatures have been unseasonably cold. He’s lucky because he’s not in a ‘frost pocket’ but he’s still had to check a few times.

“I cut into a few fruit buds and look for damaged tissue from the cold but luckily nothing,” he says, adding, “They look healthy and happy.”

He’s cautiously optimistic because he can’t count on the weather and he could get frost tomorrow or worse, in a few weeks.

“At this point it’s not much of an issue. The problem would come if we get frost after bloom.”

He anticipates that the orchard will bloom in a couple of weeks (or sooner if there is a sudden warm stretch). Once blossom  happens, he’ll have a real sense of what the growing season will look like.

In the meantime, he’s also keeping an eye on precipitation. It’s was a fairly dry March and some areas are concerned about the potential for significant drought this year.

If there is a drought, farmers will find out sooner than in the past thanks to a new initiative by the Okanagan Basin Water Board. They are introducing a new alert program to keep growers informed about water levels in the various municipalities in the Okanagan.

What does that mean for farmers?

Adrian feels that being informed will help him be more meticulous about how and when to water. And, he anticipates that having municipality-specific information will be much more useful than the reports that in the past that have been regional or province wide. It’s the pilot year for this new resource, so Ambrosia apple growers like Adrian are waiting to see how it will help them in the orchard.

In an industry that it so dependent on weather, having just a bit more information can feel like a real lifeline.

But, Adrian is quick to point out, this is the reality of farming – it’s in the hands of Mother Nature. All he can do right now is hope for the best.

The outlook will become clearer as the spring progresses. “Next month we’ll be able to see crop load, see what set and what didn’t, and we can see the pollination rate,” he says. Once that happens, he’ll have a better picture.