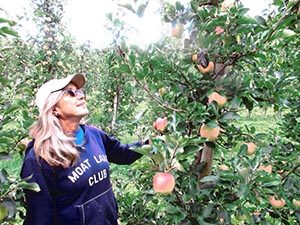 We first met Julie in August 2014, shortly after the unexpected death of her husband, Joe. The Ambrosia farming community rallied to support her through the difficult time, and through her first solo harvest. Watch the video here: Click Here

We caught up with Julie last month to discuss the ups and downs of farming, and how she became an orchardist in the first place. She now runs the orchard with her daughter, Katie, and Katie’s partner, Devon.

“Joe and I were both 18 when we met at UBC,” Julie remembers. “I was considering journalism, but Joe already knew what he wanted to do. Falling in love with Joe meant becoming an orchardist. I don’t know what I’d be doing if I weren’t an orchardist, but I do know that I wouldn’t be as happy.”

Julie loves working outside and couldn’t imagine a better way to live or to raise kids. “Katie and her brother Brian were raised right beside Joe and I,” she says. “Who could ask for a better life?”

She does appreciate, however, that farming isn’t easy. “It’s a life of ups and downs,” she says. “Boom and bust. And it’s hard work but that isn’t a bad thing. We’ve had years where we were living well below the poverty line but that didn’t stop us from replanting. Always believing in next year – it would get better. And sometimes it did.”

“One of the hardest things to learn when I took over the orchard after Joe died was how to watch other people thinning and picking the apples,” she says. “Joe was so meticulous, and he had trained me to be just like him – to see things through his eyes. It was hard watching other people do my job and my impulse was to reach out and re-thin every spot that was missed.

“I knew that if Katie and Devon were going to be successful at the task of running this orchard when I retire they had a lot to learn. They needed experience and that was going to take some time. I’d call it a team effort.”

We asked Julie why they chose Ambrosia apples: “Because Wilfrid and Sally Mennell were good enough to share the variety with the industry. Every Ambrosia tree that grows on this orchard was grown by Joe in his own nursery and planted by me and him. No one else was allowed to touch our Ambrosia apples when Joe was alive. It was easily Joe’s favourite apple – both to grow (as a farmer) and to eat. Sweet, crisp and so beautiful in the bin. Not just another red apple – the Ambrosia is special because it is a bi-coloured apple. In this household, the apples that we put into storage for the winter are mostly Ambrosia – they keep very well. We finish the last of them about the time the cherries ripen on the tree out front.”

When we caught up with Julie last month, her Ambrosia orchard had just become certified with the Pacific Agricultural Certification Society (PACS) as organic. This was a long and arduous process, but one that Julie felt passionate about.

She also feels passionate about farming, and reminds consumers that “every farmer in BC works hard to produce the best food that he or she can produce, and the BC brand means that the food they’re eating is second to none. It makes a difference when consumers ask for and support that BC brand. And farmers appreciate that support.”

Our thanks to Julie, and Katie and Devon, for their hard work and dedication!