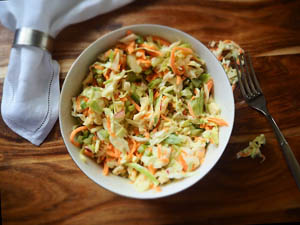 One percent of the world is vegan, which may not seem significant, until we realise that this translates to about eighty million people (twice the population of Canada), and the movement is growing. Those who identify as vegans believe eating a solely plant-based diet is healthier for the body and better for the planet. World Vegan Month was established in 1994 to commemorate the forward movement of the ideology.
Much has been written about the ethical implications of veganism and while we will not weigh in here, we can concur that a vegan diet is a very healthy option. For those who’d like to take the plunge, it’s recommended that veganism for 30 days is a great way to begin, and what a better time than World Vegan Month: November?

Of course, Ambrosia apples lend themselves wonderfully to a vegan diet. Why not try this Vegan inspired menu during November? Or, try our vegan apple slaw recipe below.

Start by making the vegan mayo in advance and chill in the fridge. If you’ve soaked your cashews, drain them before adding them to the mixture. If you haven’t soaked them, the blending might take a little longer. Put all ingredients except for the oil and vinegar in a food processor and combine until smooth. Combine oil and vinegar in a small measuring cup.

Slowly add the oil and vinegar mixture to the food processor while it is mixing on the lowest setting. Continue until mayo is thick and forms peaks.

Toss all fresh ingredients in a bowl with vegan mayonnaise. Use only a little to start until you have the coating level you prefer. Store salad covered in the fridge until it’s time to serve.