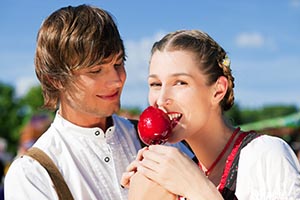 It’s October, a month in which we celebrate all things German! We thought we’d explore the holiday and its origins and discovered it’s not technically for the entire month of October, and it’s not only about beer!

According to the Encyclopaedia Britannica, Oktoberfest is an annual festival in Munich, Germany, held over a two-week period and ending on the first Sunday in October.

The festival originated on October 12, 1810, in celebration of the marriage of the crown prince of Bavaria (who later became King Louis I) to Princess Therese von Sachsen-Hildburghausen. The festival concluded five days later with a horse race held in an open area that came to be called Theresienwiese (“Therese’s green”).

The following year the race was combined with a state agricultural fair, and in 1818 booths serving food and drink were introduced. By the late 20th century the booths had developed into large beer halls made of plywood, with interior balconies and bandstands. Each of the Munich brewers erects one of the temporary structures, with seating capacities of some 6,000. The mayor of Munich taps the first keg to open the festival. Total beer consumption during Oktoberfest is upwards of 75,800 hectolitres (about 2 million gallons). The breweries are also represented in parades that feature beer wagons and floats along with people in folk costumes. Other entertainment includes games, amusement rides, music, and dancing. Oktoberfest draws more than six million people each year, many of them tourists.

A number of cities in the world, particularly those with large German American populations, hold Oktoberfests modelled on the original in Munich. These popular celebrations, which feature beer and German food, are an attempt to reproduce the Bavarian sense of gemütlichkeit—cordiality. Oktoberfest runs from Saturday, September 17 to Saturday, October 1, 2022, though the entire month of October is also associated with the celebration.

Germany enjoys a long association with apples. Ambrosia apples lend themselves beautifully to German cuisine, and we have several recipes on our website inspired by Germany, including this recent Braised Red Cabbage with Ambrosia Apples.