Getting Ready for Harvest Time

It’s an exciting time in the Ambrosia apple orchards across British Columbia – we’re in the final stretch! 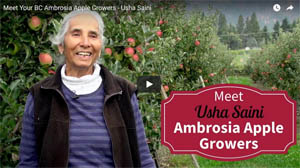 To find out how this year’s crop is looking, we stopped by a small Ambrosia apple farm run by the amazing Usha Saini. She’s in her 70’s and still running her orchard all by herself (find out more of Usha’s inspirational story in this video).

Like all farms in the Okanagan this year, Usha has had some smoky days. It’s hard to say specifically where the smoke was coming from because this past summer (2018) there were over 500 forest fires burning in BC. However, Usha tells us that for many of the days, the smoke clung to the valley leaving her farm, which is at a slightly higher elevation, with blue skies.

Smoke or no smoke, Usha is still out there every day, walking or driving through her orchard, checking on her Ambrosia apples.  Luckily, the smoke doesn’t affect the taste of the apples. But, it certainly can make it harder to work in the orchard. On a positive note, she says the smoke blocks the sun so the Ambrosia apples won’t get sunburned and the temperatures are a little cooler too.

As for her Ambrosia apples, Usha says they are looking beautiful. “The apples are very big; a good size. And, clean, very clean with not many defects or marks,” she explained.

As for her crop this year; she reports that it’s a little light. What she means by this is that there are fewer apples on her trees this year compared to past years. This is a part of the unpredictability of farming. Some years the trees produce a lot of apples and others years, they don’t. It can be cyclical although the Ambrosia variety is less cyclical than many other varieties of apple.

The light crop, however, means that her trees can put all of their energy into the fewer apples that are on the tree. As a result, she is expecting that her harvest will be a few days earlier this year and she’s going to have big apples to pick.

Usha still gets out to pick her own apples with the help of three or four other pickers (some paid, some volunteer). She’s looking forward to harvest time – and so are we!

Can you believe it’s only another month until we’ll be crunching into a freshly picked, BC-grown Ambrosia apples?  Maybe sooner, if we take a trip to Usha’s farm in West Kelowna.