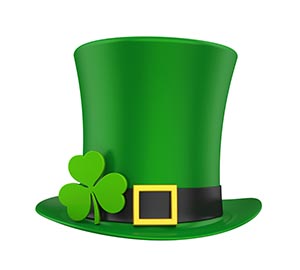 “When the apple is ripe, it will fall.”

St. Patrick’s Day is celebrated annually on March 17, the anniversary of his death in the fifth century. The Irish have observed this day as a religious holiday for over 1,000 years, but in the last century or so, it has become a day to celebrate all-things-Irish all around the world. And what’s not to celebrate? The Irish are a fun lot! So just for fun, we thought we’d explore the significance of the apple to the Irish.

We consulted the Irish culture experts at IrelandCalling, and learned that the apple and the apple tree play a major part in many Celtic myths and legends, including this one about Connla, the son of Conn (who the Irish province of Connaught is named after):

“In the Irish Story of Connla of the fiery hair, Connla was seduced by a fairy maiden who gave him an apple which, once eaten, would replenish itself, becoming whole again. Connla ate nothing but this apple for a whole month, after which time the fairy maiden reappeared. Eating the magical apple had given Connla a powerful longing for the fairy and he joined her on her crystal boat to the other world, a magical island where the trees bore a never-ending supply of the fruit giving him everlasting youth but forbidding him from ever returning to the land of man.”

The Celts believed the apple to be associated with rebirth and were said to bury apples in graves as food for the dead. (They weren’t the only ones! Petrified remains of sliced apple have been found in tombs all over Europe and West Asia from as far back as 5,000 BC.) And, as we mentioned back on Valentine’s Day, according to Celtic mythology unmarried people should sleep with an apple under their pillow to encourage dreams of their future spouse.

The letter QUERT – Q – is also the tenth letter of the old Irish Ogham alphabet, and represents healing, youthfulness, and rebirth.

Crab apples were known as wild apples in Ireland and were listed as one of the seven ‘Nobles of the Wood’, believed to be an important food source since the first humans set foot in the country. Traditionally, apples were made into wine, cider and juice, but were also used to flavour mead.

Of course, Ambrosia apples have many health benefits. They are a good source of vitamins and minerals and they are believed to strengthen the metabolism, balance digestion, lower cholesterol, stimulate blood production and cleanse the system.
Why not try this traditional Irish Apple cake with Ambrosia apples this St. Paddy’s Day?