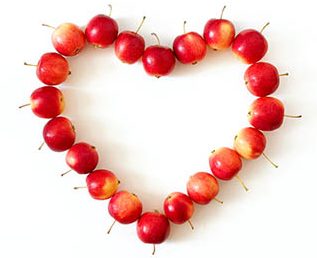 The apple has long been associated with love. With so many other tokens of affection, it sometimes gets lost in the shuffle, but since ancient times, it has been a symbol of love, ecstasy, fertility and abundance.

The phrase “apple of my eye” is a very old expression which means “an object of affection or love.” It appears in the bible a number of times, in Old English, Shakespeare used the phrase in A Midsummer Night’s Dream (1600), and Sir Walter Scott uses it in his novel Old Mortality (1816). And, of course:

“You are the sunshine of my life

That’s why I’ll always be around

You are the apple of my eye

Forever you’ll stay in my heart”

In Celtic mythology unmarried people should sleep with apples under their pillows to encourage dreams of their future wife or husband.

And, according to an old English myth, If someone peels an apple in one piece and throws it over their shoulder, it will fall in the shape of a future love’s initial.

Since Ambrosia means “food of the gods,” we were particularly pleased to read that the origins date back to ancient Greece, where the apple was an emblem of love and sexual desire. The Greek god of wine and the harvest, Dionysus, offered apples to win the goddess of love and fertility, Aphrodite’s, love. The affair was brief, but the symbol endured. It was believed that if a man tossed an apple to a maiden, he was professing his love; if she caught the apple, or even attempted to, she was declaring his love reciprocated.

The ancient Greeks also believed the apple to bring abundance and fertility; it was customary on the wedding night for the bride to eat an apple, ensuring sexual desire, fertility, and abundance within the marriage.

Wishing you all love and abundance this Valentine’s Day! If you’re single, why not try one of the above? If it’s with an Ambrosia apple, we’re certain the outcome will be sweet.