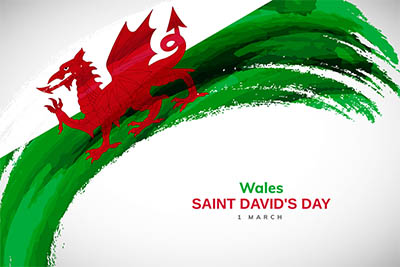 St. David is the patron saint of Wales, and March 1 is a time for Welsh communities all around the world to celebrate.  Many Welsh groups organize various St. David’s Day festivities and Welsh choir concerts. People display the Welsh flag and it’s a time for people of Welsh origin to wear daffodils or leeks on their clothing as a symbol of their connection to Wales.  We thought we’d investigate how the Welsh – and St. David himself – are connected to our favourite apple.

Although St. David plays a very important role in Welsh culture, very little is known about his life. It is rumoured that he lived to be 100 years old and that he died in 589, but the first texts on his life only appeared around five hundred years after his death, so it’s hard to determine which part of his story is true and where the legend takes over.

A modest monk, David is credited with performing miracles and for moving mountains, and churches and monasteries around the world are named in his honour. He became known as Dewi Dyfrwr (‘David the Waterdrinker’) because of his humble monk’s diet of bread and water. Even meat and beer were forbidden. We are convinced that with all of Ambrosia apples’ health benefits, they would have been acceptable (or they should have been).

The nickname ‘Taffy’ for a Welshman links back to St. David as the original and ultimate Welshman – the term dates to the 17th century and derives from ‘Dafydd’, the Welsh for David. Who doesn’t love Taffy Apples? Here’s a recipe from our friends at All Recipes. Of course, we use Ambrosia apples, their juiciness and crunch are the perfect complement to the “taffy.”

The saying “An apple a day keeps the doctor away” is derived from the Welsh proverb, “Eat an apple on going to bed, and you’ll keep the doctor from earning his bread.”

In the Welsh Câd Goddeu (The Battle of the Trees), the Apple is described as the noblest tree of them all, the tree that symbolized poetic immortality.

And finally, David Thompson, the 19th century explorer, was Welsh. Since he explored the entire length of the Columbia River, it’s highly likely that he stood in some of the very orchards that grow Ambrosia apples today. Maybe even Cawston, where the Ambrosia apple was first discovered on the Mennell’s farm? We like to think so!

However you celebrate – or even if you don’t – Happy St. David’s Day from all of us. We’ll leave you with St. David’s final words: “Do the little things, the small things you’ve seen me doing.”