Why do we Give Teachers Apples?

Put an Ambrosia Apple on Your Teacher’s Desk 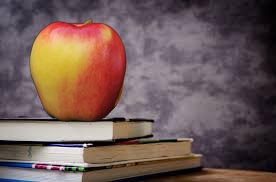 Giving a teacher an apple is a long-standing tradition but have you ever wondered where it comes from?

Apples have been symbolic of many things in our long storytelling history. The apple plays prominently in Greek mythology. There are apples in the Garden of Hesperides that symbolize knowledge and immortality. Depictions of Venus, the Greek god of love and fertility, often show her holding an apple. And, the battle over a golden apple was ultimately what led to the Trojan war.

Did you know that Ambrosia apples also get their name from Greek mythology? ‘Ambrosia’ was the name given to the food of the gods. And, when the Mennells first discovered this new apple variety, Wilfrid’s first thought was that it was so tasty it was pure Ambrosia; truly food fit for the gods. Apples were routinely pictured at feasts attended by the Greek gods, so the name is extra fitting.

Out of this ancient history, apples maintained the enduring symbolism for knowledge. Perhaps that’s why parents who couldn’t afford to pay the teachers chose apples instead of some other fruit. This practice was first recorded in Scandinavian countries where teachers were paid through a barter system that included getting bushels of apples. It was later adopted as a payment program for teachers in rural parts of America when the local government couldn’t afford a teacher’s salary.

While other produce was sometimes used as payment, teachers preferred the apple. Some say it’s because of its symbolism as the fruit of knowledge. Another theory is that apples back then were quite bitter and usually pressed to make hard cider.

As time went on, and teachers started to get paid in real money (not apples), the gift of an apple remained as a token of appreciation or, some might say, a salary bonus.

If you’re going to carry on this tradition, make sure you give them an apple they’ll love. Ambrosia apples have been named best apple in many competitions and are loved by thousands. They’re sweet, crisp, healthy, and will look beautiful sitting on teacher’s desk. It’s a good bet that if Ambrosia isn’t your teacher’s favourite, it’s probably only because they haven’t tasted one yet!  And if that’s the case, you get to be the one to teach them something new.