Why This Year’s Top Apple Prize is so Fitting 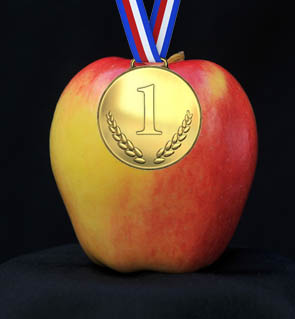 For the second year in a row, Ambrosia apples have been declared the best of the new apple varieties at the Royal Agricultural Winter Fair. The winning apple was grown by farmers Robert and Jane Mennell of Muckabout Orchards in Cawston, BC. Many apples were tasted but theirs was named the Grand Champion of New Varieties, winning them the Canadian Horticultural Council Trophy.

If you’re thinking you may have heard the name Mennell before, it’s because the Ambrosia apple was first discovered on Sally and Wilfrid Mennell’s farm. Wilfrid and Robert are brothers and their farms are just around the corner from each other in Cawston, BC.

In fact, Ambrosia apples have been a family affair since they were first discovered. Wilfrid and his two brothers, Robert and Brian along with their partners (Sally, Jane, and Linda, respectively) were the driving force in getting this new apple variety to market.

After tasting and loving the apple from a chance seedling, they all decided to see if there would be interest in this new type of apple. So, they each converted a small portion of their orchards to Ambrosia. After one season (and completely selling out of stock), all three Mennell family farms added a whole lot more Ambrosia apple trees to their orchards.

Many more BC Ambrosia farmers would join in the decade-and-a-half that has followed, but it was in those Mennell family orchards where Ambrosia really got its start. So, it seems quite fitting that the best Ambrosia apple in the country this year was grown in Cawston on Robert and Jane Mennell’s farm.

Robert told the Penticton Review that he doesn’t normally enter contests like this but he’s happy with the outcome.

The Royal Agricultural Winter Fair holds apple competitions in Toronto each year. There are three main categories – Commercial, Heritage, and New Varieties. A winner is determined in each variety within these groups and then a grand champion is declared for each category. This is the second time that an Ambrosia apple from BC has taken the trophy in the New Varieties category.

Last year the winner was Steve Brown from Happy Valley Farm in Summerland, BC. Will another BC Ambrosia apple grower take the prize next year? Perhaps that will be a bit of extra motivation for the farmers as they brave the cold, winter pruning days ahead.